Skip to content
Around 1:45pm yesterday, while in the office, I started feeling the pain in my lower abdomen, similarly to a menstrual cramp but the pain was tolerable, since I was used of having menstrual cramp during my monthly period. I continue working, until the pain lasted for hours and was actually getting stronger plus a lower back pain. With a task to finish, I simply endure the pain which was still bearable at that time, I manage to take note of the gap of each contractions. It was taking 10 to 15 mins with a gap of 20 to 60 seconds. The pain was progressing, at this time it was like a severe menstrual pain, that makes me want to lie down and rest. At that time the contraction pattern was still irregular. I called the hospital to report what was going on with me, and was advice to go to hospital for checking. I was constantly communicating with Hubby and he was almost in a panic mode while at work, too bad he need to finish something for that day. I waited until the end of office hours to go home.
At home, I lie down and rest for a while, while hubby was preparing our diner. The pain slightly subsided but it was not totally gone. After our diner, we prepare ourselves to the hospital. I took a bath as I might not have the chance to take a bath if I get admitted. Around 10:30pm we arrived at the hospital, just like nothing was going on with me. Hoping that this would be the big day hubby was getting excited and nervous, but there was this thought in our mind that I will be probably sent home. According to hubby everything looks normal with me. We were even laughing at ourselves why we head to the hospital. Anyhow, we also want to know what exactly was going on, so seeing our doctor was the right thing to do.
The hospital information counter was already close so we proceed to the nurse station as instructed. A short interview with the nurses, they ask me how I feel blablabla…then they take me to the labor/delivery room, for external fetal monitoring. I was totally relaxed, the nurse even told me looks like nothing was wrong with me and if I am in a true labor I would probably not talk to her the way I did last night. 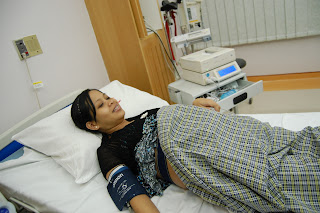 For almost 2 hours of monitoring, it shows that baby Z was perfectly fine inside my womb and I only had mild to slightly severe contraction. We waited for the doctor to come and let her decide whether I will be admitted or not. The moment the doctor arrived, she examines my tummy, and did an IE as well. That was my first IE; it was too uncomfortable and slightly painful down there. We were told that I was in an early labor but I was only 1cm dilated. So the doctor decided to send me home, since I was only 1cm dilated but was advice to stay at home and observe my condition and once the pain get to stern, we know what to do. It was but a false alarm due to excitement perhaps.
This morning I woke up with the same feeling. The pain was still there but tolerable, according to the doctor there’s no way to relieve the pain, and I just have to find a comfortable position that may help ease the pain. Now im trying to walk around and do some house hold chores to help increase my dilation. Seriously, I am almost there, and I really hope to deliver soon. 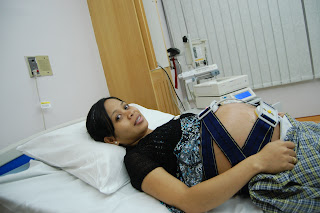 2 thoughts on “Early Signs of Labor or was just a false alarm?”

Hello & Welcome to my teensy online space. I'm Bev and I'm so glad you're here. I write about the joys and struggles of parenting & homeschooling our precious jewels.