It’s been a week after I gave birth to our lil Z, finally the long wait is over and we are now enjoying our new bundle of joy. I love every single moment with my little one.

A week after the false labour, finally the moment that we’ve been waiting has arrived. On my 38 weeks and 4th day of pregnancy, around 8:15pm on December 2, 2010 after having our dinner and while preparing for bedtime, I felt a trickle of water coming out down there. I wasn’t alarm at all, until another trickle came realizing that my water bag broke. So I immediately called my OB and was advice to go to the hospital immediately.

Hubby and I prayed and calmly go to the hospital, and were immediately admitted. My OB arrived, and did internal examination. I was 3cm dilated but my water bag did not break yet, it was just some sort of leak. I was under observation the whole night, to see if my contraction will progress. 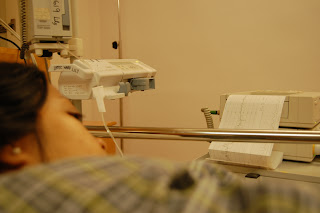 The following day, December 03, I was awaken by hunger, we had our breakfast which was my last meal. My contraction was not progressing but the leak was still on, so they have decided to do a labour augmentation. Around 8:00am they give me oxytocin drug which is a natural hormone that will help the frequency and strength of contraction. After an hour of having oxytocin, the baby’s heartbeat falls down, the midwife then temporarily stop the oxytocin and wait for my OB’s decision. At 10:00am, OB was in, according to her, lil Z’s heartbeat was still normal; they then turn on the oxytocin back. This time I started feeling the pain of contraction but it was still bearable. The contraction finally progress and at around 11:00am, my water bag finally broke and it was the start of the intense contraction. I was tense as the contraction becomes more intense. My breathing technique would not help me either. So I have asked for a pain reliever. They gave me pethadine, which made me drowsy and brought me to sleep for 2 hours, I was awake at around 2:00pm, and it seems that the pain reliever was not working anymore, I was in soo much pain and I was again asking for another pain reliever. To my dismay they cannot give me another pain reliever coz pethadine requires 4 hours interval before injecting another one. Instead they gave me this laughing gas to help me ease the pain but it seems it was not helping me at all. It was my choice not to have an epidural; I wanted to experience the birth pangs and the backbone injection for epidural actually scared me. All the while I was asking hubby to massage my lower back as it gives me a relief.

I was asking where my OB was and we were told that she was still undergoing a caesarean operation. It was a busy day for my OB, we were 3 patients under her care who gave birth on the same day. 5:00pm, the midwife came from the caesarean operation, I was 9cm dilated, and she told my husband that OB is almost done with the operation and at 6:00pm she arrived. I was still feeling drowsy that time, but I know exactly what was going on. Everybody in the birthing team was busy. OB examined me, though she did not tell me, I knew I was fully dilated. There you go, I start feeling the urge to push. OB instructed me to push whenever there is pain and an urge to push. She instructed me take a deep breath and to put my chin on my chest while pushing. There you go…Everytime I push, I heard a cheering squad composed of my OB, the midwife, the paediatrician and the nurses.”Yes! Yes! Youre doing well Beverly! Push! Push! Push! Harder! Harder!”

I did several push but lil Z was not yet out. OB keep on showing hubby the baby’s head to help her encourage me to push harder. Hubby would also hold his breath everytime I push.OB keeps on telling me to push harder coz she doesn’t want to use any equipment to assist me; she wanted me to deliver the baby normally. She lets me rest for a while first, to avoid exhaustion. After a few minutes, I started pushing again, but I still can’t make it. This time OB decided to have my birth assisted by a forceps. It was a great decision, after using a forceps to turn slightly the baby’s head; it only took me one push then I heard my hubby telling me, he is out! he is out! It was 8:15pm, December 03, 2010, when I gave birth to a 3.17kg healthy baby boy. I was relief when I saw him and more than contended when I heard him cry while the paediatrician is attending to him. I even told hubby to start taking picture of him.

I thought the agony was finally over, but the stitching of the episiotomy was more painful than the delivery and contraction. The anaesthesia that they have injected me did not work, I did feel every stitch and I was crying and shouting like a baby. 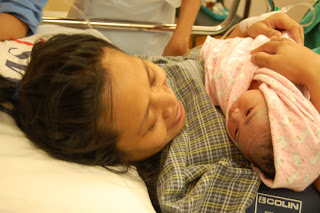 They gave me the baby to pacify me and to divert my attention while the stitching was going on. Carrying and meeting him for the first time was the most fulfilling moment in my life. He was looking at me while I was telling him he was beautiful. (I forgot my baby was a boy, so he must be handsome). Though I was in so much happiness at that time, I can still feel the painful stitching that my OB was doing down there and could not help to react. 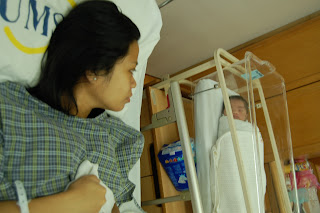 After 10 hours of labour it was all worth the pain. It’s the wonders of God’s Creation and is truly a miracle. It’s the greatest blessing that we have our happiness beyond happiness. 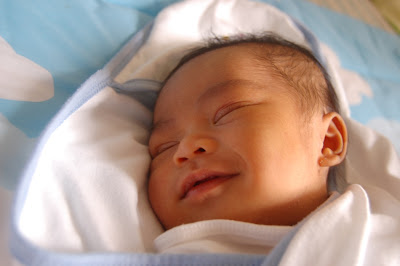 4 thoughts on “It’s All Worth the Pain”

Hello & Welcome to my teensy online space. I'm Bev and I'm so glad you're here. I write about the joys and struggles of parenting & homeschooling our precious jewels.